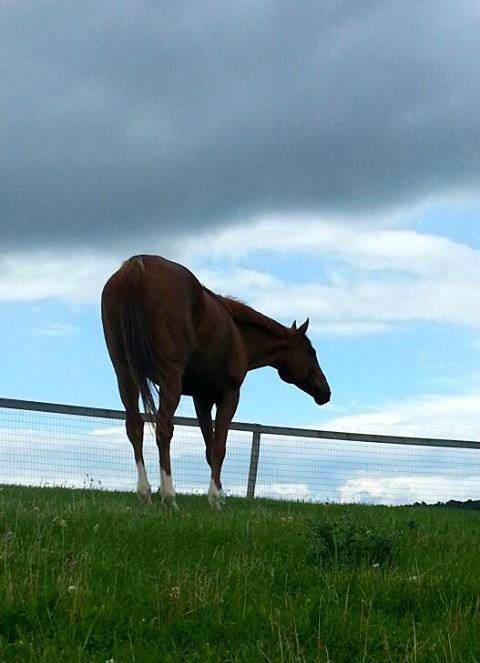 This photo is of Derby… the miracle horse! He was a red bag foal. Shortly after birth I took him to the UW Madison Vet. College/Clinic. The teaching vets. said he’d more than likely die and if he lived he would never thrive. I came home and cried out to God and asked why…. Derby was the last foal out of a Storm Cat stallion my father owned; he was my fathers last gift to me. I felt like I was being robbed of a precious, irreplaceable gift. God said to me, “Go get your horse… I have given you the authority, in Jesus name, to speak life to him!” I called the head of the Clinic, apologized for not acting like a woman of faith, and said I was coming down to pray for my foal, and that my foal would live. On the way to Madison I positioned myself in Christ; Jesus is seated next to the Father, ruling and reigning in righteousness, I am in Him, and He is in me. When I speak His Word, He speaks. When I got to the Vet. Clinic the foal was only able to blink his big brown eyes. The stall walls were covered with his blood from hemorrhaging. I kept control of my mind and focused on His promises. I sat down on the stall floor, put his little head on my lap, and began to speak the Word over him. I commanded him to live and not die, to be completely restored, in Jesus name. As the teaching vet from Argentina told my the facts and that my foal would die, I answered each negative report with the Words, ‘but this one will live and not die’! No matter what he said, I covered the negative report with the Word of God. I told the vet I would pray for him to have the wisdom of God as he treated the little stud colt and that I would be back to pick him up soon. The next day he called me and said, ‘You won’t believe this, your colt is standing and nursing! But don’t get your hopes up…’ I told him my hopes are already up, this one will live and not die!” The next day the vet called and said, “You really won’t believe… Oh, yes you will… We just drew blood and his blood count is 30% above normal!” I laughed with joy and said, This one will live and not die!!!” He said we should wait to bring him home… I said, “I’m on my way!” When I got to his stall, I put a mare halter on him like a harness to lead him out to the trailer. He was so full of life I could hardly hold onto him as he jumped and bucked down the hallway toward the checkout like a little reindeer! At the check out/reception area, every single person in the clinic gathered around me as the receptionist announced… “Do you know this is the sickest animal to ever leave this hospital!?!” I smiled as I held my prancing colt and said, ‘The same God that loved me enough to give me my foal back, loves you and desires for you to know Him. The same God that raised this little guy up desires for you to know Him; He loves you.’ Jesus did this miracle for the sake of those watching and listening to this story. Derby lived to help bring healing, deliverance, hope, and love to countless people. God used Derby to teach me faith. Just like Peter learned to take a step of faith, he’s teaching us to walk on water for the sake of the people on the other side of the lake! The desciples got in the boat to go to the other side.. only Peter got out of the boat, his faith wasn’t perfect, he wasn’t perfect, but He desired to walk on water… with Jesus. The Word says, ‘As He was on this earth, so are we.’ Let’s live in the realm of the miraculous intentionally.

Want to join the discussion?
Feel free to contribute!

This site uses Akismet to reduce spam. Learn how your comment data is processed.

“Lessons Learned From A Horse” by Mary Jo ShaneA New Season Has Begun!
Scroll to top